Manual Lymphatic Drainage is a very specific technique that helps move fluid through your lymphatic system, decreasing swelling and inflammation and supporting immunity.

Is Manual Lymphatic Drainage for me?

Manual Lymphatic Drainage can help pre- and post-op recovery for many surgeries, including abdominoplasty (tummy tuck) and BBL. My Manual Lymphatic Drainage sessions are tailored to your needs, and can be combined with a variety of my other massage modalities for the most effective outcome. Ailments for Manual Lymphatic Drainage include Sprains, Whiplash, Hematomas, Post-Surgical Edema, Fibromyalgia, Chronic Fatigue Syndrome, Rheumatoid Arthritis, Scleroderma, Parkinson’s Disease, Multiple Sclerosis, Lupus, Migraines, Sinus Headaches, Diabetes, Lymphedema, Lipedema, CRPS, Severe Burns, and more.

Through Manual Lymphatic Drainage treatment, the lymph fluid carries the waste products and destroyed bacteria back into the bloodstream. The liver or kidneys then remove these from the blood, and the body passes them out with other body waste. 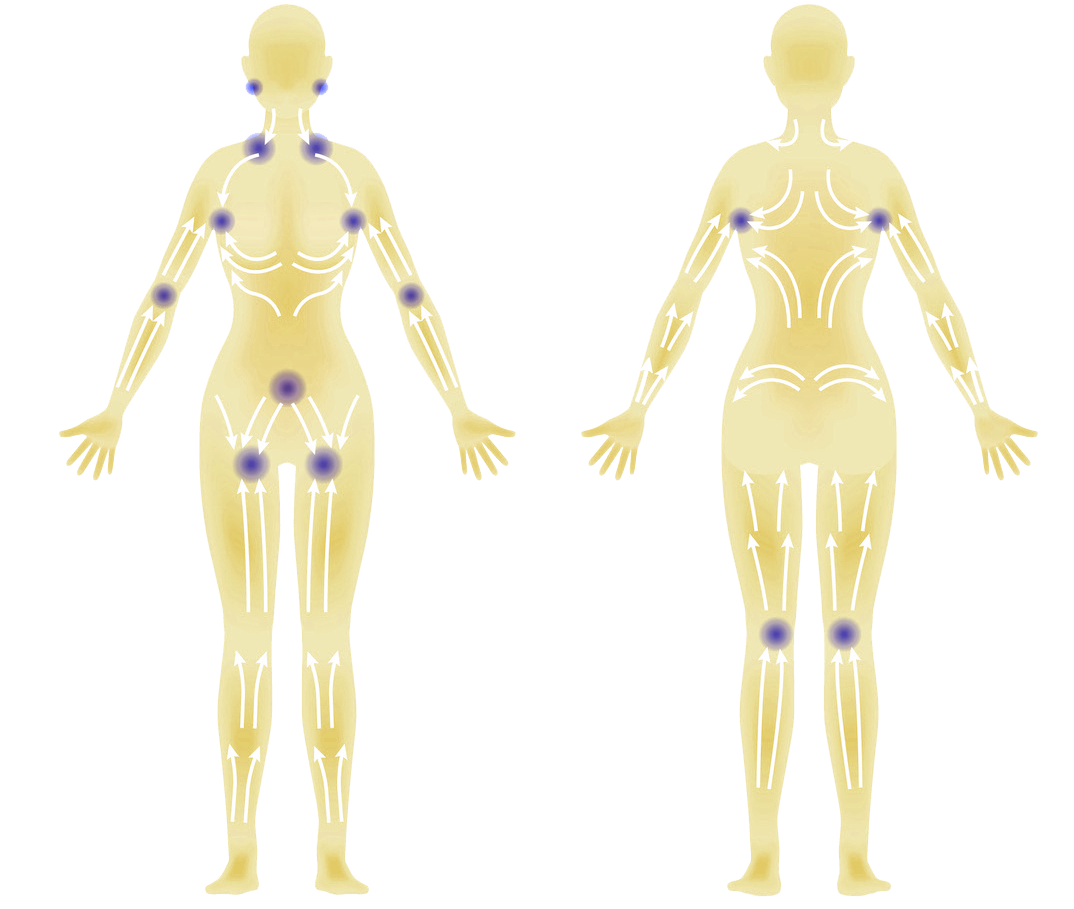 Why is the lymphatic system important?

The lymphatic system is often referred to as the secondary circulatory system and plays an essential role in immunity. I often refer to it as the great recycling system because it cleans out the body’s excess waste in the connective tissue that’s too big for the blood vessels to absorb. The lymphatic system runs like rivers throughout your body similar to your bloodstream. However, it doesn’t have a central pump, like the heart, to move the fluid. It depends on skeletal movement, diaphragmatic breathing, exercise and lymphatic massage to function. Lymphatic drainage increases the intrinsic contractions necessary to maximize micro-circulation of fluid into lymph nodes where an immune response gets activated. Lymph nodes are the hub where bacteria, viruses and pathogens are filtered out so that lymphatic fluid can return to the bloodstream toxin-free. You have hundreds of lymph nodes, a majority of which are clustered in the neck,  armpits, spleen, abdomen, top of the thigh, and behind the knees and elbows that contain disease fighting white blood cells, macrophages and lymphocytes that act as detectors signaling your immune system to destroy unwanted invaders.

When the lymph system becomes overwhelmed it can’t function optimally and may impede other bodily systems like your digestion, respiratory system, neurological system and more.

What are the benefits of Manual Lymphatic Drainage?

Why should I get Manual Lymphatic Drainage?

People come to see me for a couple of reasons. There are those who come because they heard that lymphatic massage and self-care should be a standard aspect of their health regimen. Others seek treatment because their stress, digestion, hormonal imbalances, surgical procedures or other symptoms cause inflammatory responses in their bodies. Many doctors recommend lymphatic drainage to their patients recovering from elective surgery, athletic injury, after a cancer diagnosis, menstrual discomfort, Covid rehabilitation, neurological issues and those seeking palliative care.

By Appointment Only
Call, Email, or Book Online